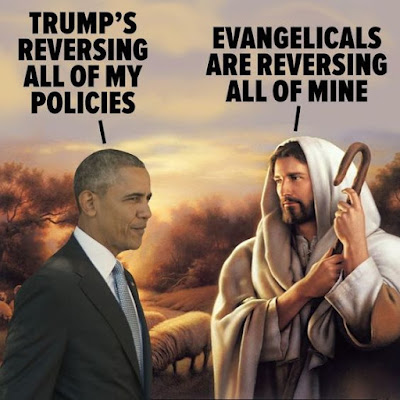 Religious freaks in the United States think they are so close to Christ because they hated Barack Obama and they love an adulterer who advocates the idea of shooting someone on 5th Avenue.

He knows that Obama is smarter than he is and he wants to erase Obama from American history books, but this has been tried before.

Akhenaten  ruled Egypt for a period in the 1300’s BC.  We know his son, Tut.  He introduced the idea of monotheism to Egypt, as he believed in a sun god.  When he died a curse was placed over him; that no one speak his name-and no one did until the 20th Century.

Enter archeologists like Howard Carter, who found the  sarcophagus.  Tut’s was also found.  Akhenaten’s embalming procedure had been deliberately botched by the Egyptian priests, and they wanted Tut out so that they could regain their power over the masses-which they did-but only for a time.

It’s the same situation as Trump with Obama.  Trump wants America to forget that it ever had a black president.  However, there are people like me who preserve history as it’s recorded.

Oh-and forget about fucking with me-I have copies.  Just like Tut and Akhenaten, the memory of Barack Obama’s accomplishments will live forever, so suck me.