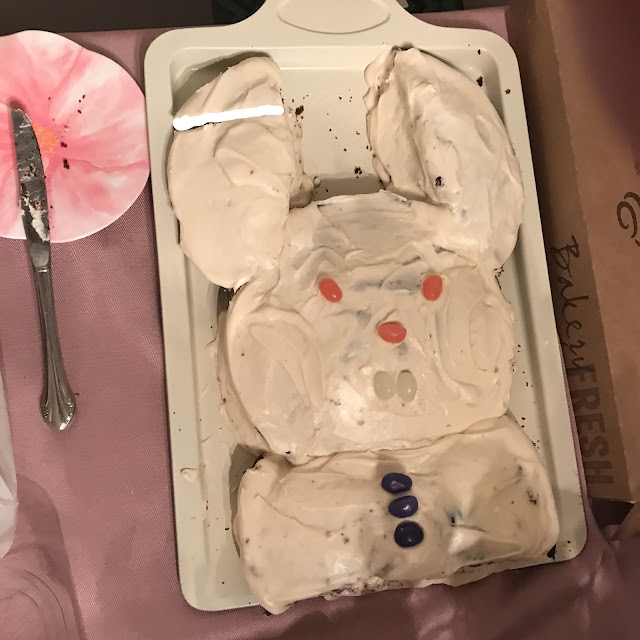 This is just another Easter tradition which will probably go when my mother decides to leave Earth-unless she gives me the pan with which to do it.

I’ve had this bunny cake every Easter since I’ve had teeth.  And even though I rarely eat crap, I find myself more appreciative of desserts like this because I know my mother probably has less than ten years left here.

Everything from its pink eyes and nose to its white buckteeth and three buttons are a reflection of who I used to be-before all the injustice which I personally experienced turned me into a revolutionary-or possibly even a profiteer, should my prediction prove to pass.

You’re damn right I plan to profit off of the impending civil war that Pat Buchanan called for.

Hell, I have to do something to make up for the 25-30 years of financial loss I experienced as a direct result of discrimination due to my developmental disabilities-and I proclaim that others in my position do the same.

While I know I’m not the only one who has been discriminated against for my disabilities, I am quite possibly the only one who is willing to let go of the stick.  For you see, I still have self-esteem, and I want business owners to suffer for what they did to people like me during the good times.

I wish I could be just like this bunny cake again-sweet and innocent.  However, that might not happen anytime soon.

The red flags wave where the smoke rises on the horizon, and it’s time to ride.

Buchanan called for it, so my conscience is clear.  After all, if you read Matthew 25:41-46, those like old Pat (one of Tricky Dick’s henchmen) will be burning in Hell like an American flag at a protest.